Northern Africa underwent widespread inundation during the Late Cretaceous. Changes in eustasy do not explain the absence of this inundation across the remainder of Africa and the timing and location of documented tectonic deformation does not explain the large-scale paleogeographic evolution. We investigate the combined effects of vertical surface displacements predicted by a series of mantle flow models and eustasy on northern African paleoenvironmental change. We compare changes in base level computed as the difference between eustasy and long-wavelength dynamic topography arising from sources of buoyancy deeper than 350 km to the evolution of paleoshorelines derived from two interpolated global datasets since the mid Cretaceous. We also compare the predicted mantle temperature field of these mantle flow models at present-day to several seismic tomography models. This approach reveals that dynamic subsidence, related to Africa’s northward motion away from the buoyant regions overlying the African LLSVP, amplified sea-level rise, resulting in maximum inundation of northern Africa during the Cenomanian and Turonian. By the Cenozoic, decreased magnitudes of dynamic subsidence, reflecting the reduced draw-down effects of slab material beneath northern Africa associated with the impact of the Africa-Eurasia collision, combined with a comparatively pronounced progressive sea-level fall resulted in ongoing region-wide regression along coastal regions. The temporal match between our preferred model and the paleoshoreline datasets suggests that the paleogeographic evolution of this region since the Late Cretaceous has mainly been influenced by the interplay between eustasy and long-wavelength dynamic topography arising from large-scale, subduction-driven, lower mantle convection. 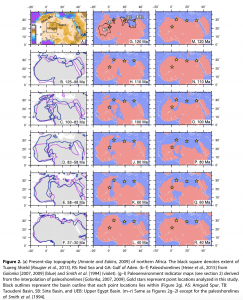