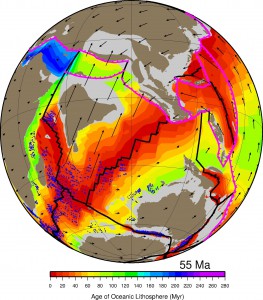 Summary
Despite several decades of investigations, inferences on the timing and nature of collisions along the Mesozoic–Cenozoic Eurasian margin remain controversial. We assimilate geological and geophysical evidence into a plate tectonic model for the India–Eurasia collision that includes continuously–closing topological plate polygons, constructed from a time-dependent network of evolving plate boundaries, with synthetic plates constructed for now-subducted ocean floor, including back–arc basins that formed on the southern Eurasian margin. Our model is regionally–constrained and self–consistent, incorporating geophysical data from abyssal plains offshore West Australia and East Antarctica, including Jurassic age data from offshore Northwest Australia, limiting much of northern Greater India to a ~ 1000 km–long indenter, originally reaching to the Wallaby–Zenith Fracture Zone. Southern Eurasia and Southeast Asia are riddled with dismembered oceanic arcs indicating long–lived Tethyan intra-oceanic subduction. This intra–oceanic subduction system was well–established from Cretaceous time in the India–Eurasia convergence zone in the NeoTethys, which was consumed during Greater India’s northward trajectory towards Eurasia from the Early Cretaceous. Fragments of obducted oceanic crust within the Yarlung–Tsangpo Suture Zone, between India and Eurasia, predominantly date to the Late Jurassic or mid Cretaceous (Barremian–Aptian). The various ophiolites along strike and a hiatus in subduction–related magmatism during the Tithonian–Aptian suggest that there was at least one generation of intra–oceanic arc formation, whose plate boundary configuration remains uncertain. Paleomagnetic and magmatic studies suggest that the intra-oceanic arc was at equatorial latitudes during the Early Cretaceous before subduction resumed further north beneath the Eurasian margin (Lhasa terrane), with another hiatus in subduction-related magmatism along southern Lhasa during ~ 80–65 Ma, possibly as the back-arc spreading centre approached the active Andean–style margin.

In our model, Greater India collided with the Tethyan intra–oceanic arc in Paleocene–Eocene time, finally closing the Tethyan seaway from Mid–Late Eocene time, which is consistent with the age of the youngest marine deposits found between India and Eurasia. Geological evidence from the collision zone indicates an age of initial arc–continent collision by 52 Ma, followed by the “soft” (initial) continent–continent collision between India and Eurasia by 44 ± 2 Ma. This timing is supported by marine geophysical data, where the spreading centres in the Indian Ocean record a drastic decline in seafloor spreading rates and changes in spreading directions first at ~ 52 Ma, followed by another reorganisation at ~ 43 Ma. The abandonment of spreading in the Wharton Basin and the onset of extrusion tectonics in Asia by ~ 36 Ma are likely indicators of “hard” (complete) continent collision, and highlight the multi–stage collisional history of this margin. Our continuously evolving network of mid–ocean ridge and subduction zone geometries, and divergence/convergence vectors through time, provide a basis for future refinements to assimilate new data and/or test alternative tectonic scenarios.

We welcome any feedback, please send us an email. Send email