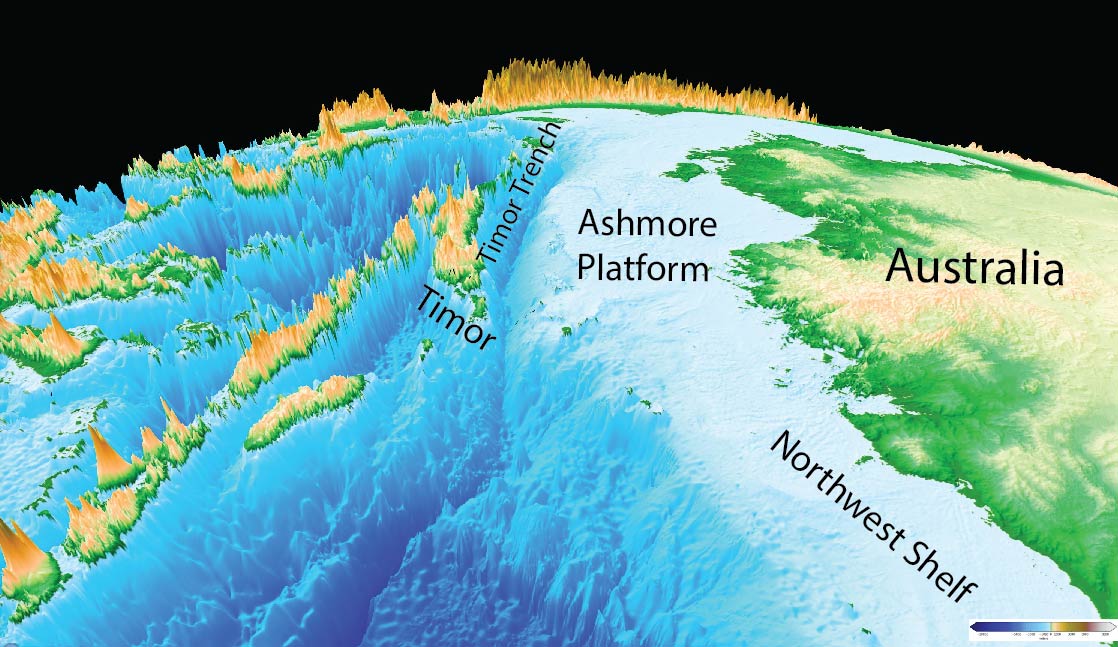 In response to ever-rising carbon dioxide levels in the atmosphere, some countries are exploring carbon sequestration as a way to mitigate the effects of this greenhouse gas. The general strategy is to inject carbon dioxide more than a mile underground, beneath an impermeable rock layer, where it can dissolve into fluids and crystallize. Injection locations must be chosen carefully, however, as small quakes and shifting fault lines could lead to burps and leaks, causing future climate issues.

DCO modeling expert Dietmar Müller (University of Sydney, Australia), worked with colleague Scott Dyksterhuis (ExxonMobil, USA) to predict changes in the Australian crust 1 million years in the future. They modeled the geologic forces pushing and pulling the Australian continent to create a future stress field, which maps out the direction and intensity of tectonic stress applied at locations across the country. The researchers describe their methods in a new paper in the journal Fuel, which they hope will be useful in evaluating potential carbon sequestration sites and reducing the chance of future leaks [1]. Their plate tectonic models also have applications for studies of subduction and deep carbon cycling through geologic time.

“In all likelihood, carbon dioxide sequestration will be an important component in the mix of measures taken to alleviate climate change in the next decade and, therefore, having carefully chosen selection criteria for these sites will be important,” said Müller. “Ideally, we should ask ourselves the question, are these places going to be stable over the next 100,000 years?”

Müller and Dyksterhuis tailored an existing model developed through EarthByte, an international collaboration of geoscientists based out of the University of Sydney that aims to model changes to Earth’s surface in deep time. Using a modeling approach that connects GPlates, a tool to reconstruct tectonic plates through Earth’s history, to finite element modeling software, they can analyze the response of Australia’s continental crust to time-varying tectonic boundary forces.

Australia exists within a “giant, three-pronged vise,” says Müller, with pressure from collisions at the boundaries of the Australian plate occurring along New Zealand, Papua New Guinea, and the Himalayas. Forces pushing and pulling the continent, including the “mid-ocean ridge push force” and the pulling force of subducting slabs, shift the continent by about 7 centimeters each year, enough to interfere with some uses of GPS, and with implications for underground sequestration sites.

Australia’s geology is highly varied, with a mix of very strong blocks of crust called cratons, and weaker sedimentary basins and fold belts. “If you apply additional horizontal pressure, this additional stress propagates into the continent in very unanticipated ways,” said Müller. The stronger elements deflect the stresses and focus them on weaker regions.

The vise squeezing Australia will gain a fourth prong in the future, as the northwest boundary of the plate, the Ashmore Platform, collides with Timor. The Australian plate will move about 70 kilometers north in the next million years, making the Timor Trench a major collision zone, says Müller.

The model predicts that the cumulative pressure will cause the greatest changes in western, central, and southeastern Australia, at locations surprisingly far from collisions occurring at the coasts. The northwestern part of Australia, however, will only experience small changes in its stress field, with the exception of sites close to the Timor collision zone.

The authors are hopeful that these projections can be used to select the most stable sites for any future carbon dioxide injection. Of the 61 sites chosen by the Australian government, the model predicts that about 10 will be impacted by severe stress changes in the next 100,000 years, either in magnitude, orientation, or both.

The stress models developed by Müller and Dyksterhuis are free and publicly available. The researchers hope that others will take advantage of these tools to predict stress fields before selecting sites for carbon sequestration. The same mountain building processes squeezing Australia also occur in India, South America, Asia, and southern Europe.

“We hope we have made a small contribution to better assessing the suitability of individual sites,” concludes Müller, “and perhaps our idea of trying to project intraplate stress evolution into the future can be applied on other continents.”