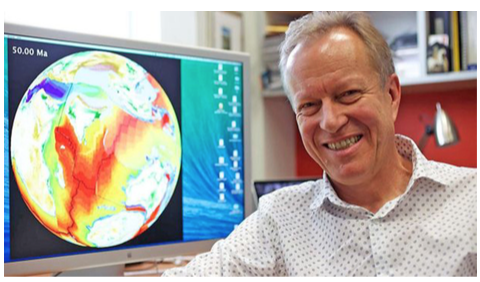 In 2016, the EarthByte group, based in the School of Geosciences at the University of Sydney, created a visualization tool and model to measure the interactions of arc volcanism with buried carbonate platforms in deep time. The new workflow tools, which are available to the DCO community, enable scientists to approximate paleo-atmospheric CO2 flux within a plate tectonic framework over hundreds of millions of years. The models go back as far as the Devonian Period, a time when the megacontinent Gondwana occupied most of the Southern Hemisphere.

In the words of project leader, Dietmar Müller, “What we have created is a virtual plate tectonic deep carbon laboratory – it revolutionizes our ability to understand mantle-crust-atmosphere interactions in deep time.”

Dietmar Müller spearheaded the EarthByte group effort, and in under two years the group managed to create tools that link paleogeography, climate and deep carbon with tectonic models. In addition, Müller and his team have created a treasure trove of outreach material to engage scientists and the public in deep-time and deep-Earth carbon science. Read more