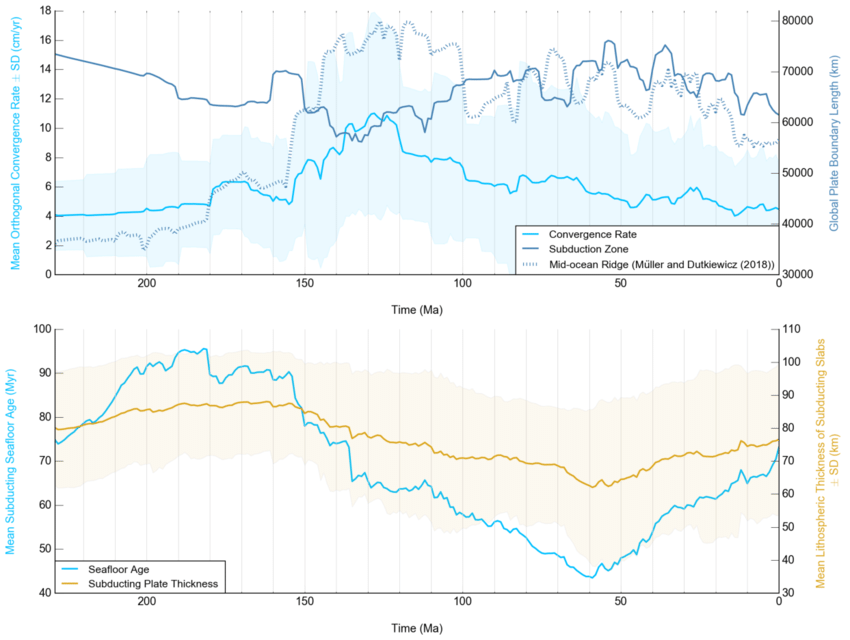 Abstract: Subduction is a fundamental mechanism of material exchange between the planetary interior and the surface. Despite its significance, our current understanding of fluctuating subducting plate area and slab volume flux has been limited to a range of proxy estimates. Here we present a new detailed quantification of subduction zone parameters from the Late Triassic to present day (230 – 0 Ma). We use a community plate motion model with evolving plate topologies to extract trench-normal convergence rates through time to compute subducting plate areas, and we use seafloor paleo-age grids to estimate the thickness of subducting lithosphere to derive the slab flux through time. Our results imply that slab flux doubled to values greater than 500 km3/yr from 180 Ma in the Jurassic to 130 Ma in the mid-Cretaceous, subsequently halving again towards the Cretaceous-Paleogene boundary, largely driven by subduction zones rimming the Pacific ocean basin. The 130 Ma spike can be attributed to a two-fold increase in mid-ocean ridge lengths following the break-up of Pangea, and a coincident increase in convergence rates, with average speeds exceeding 10 cm/yr. With one third of the total 230 – 0 Ma subducted volume entering the mantle during this short ~ 50 Myr period, we suggest this slab superflux drove a surge in slab penetration into the lower mantle and an associated increase in the vigour of mantle return flow. This mid-Cretaceous event may have triggered, or at least contributed to, the formation of the Darwin Rise mantle superswell, dynamic elevation of the South African Plateau and the plume pulse that produced the Ontong-Java-Hikurangi-Manihiki and Kerguelen plateaus, among others.

The models presented here contribute to an improved understanding of the time-evolving flux of material consumed by subduction, and suggest that slab superflux may be a general feature of continental dispersal following supercontinent breakup. These insights may be useful for better understanding how supercontinent cycles are related to transient episodes of large igneous province and superswell formation, and the associated deep cycling of minerals and volatiles, as well as leading to a better understanding of tectonic drivers of long-term climate and icehouse-to-greenhouse transitions.