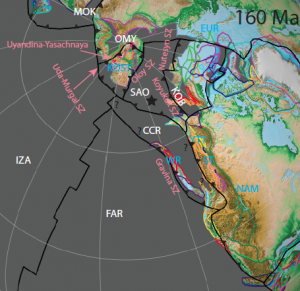 Summary
The tectonic evolution of the circum-Arctic, including the northern Pacific, Siberian and North American margins, since the Jurassic has been punctuated by the opening and closing of ocean basins, the accretion of autochthonous and allochthonous terranes and associated deformation. This complexity is expressed in the uncertainty of plate tectonic models of the region, with the time-dependent configurations and kinematic history remaining poorly understood. The age, location, geometry and convergence rates of the subduction zones associated with these ancient ocean basins have implications for mantle structure, which can be used as an additional constraint for refining and evaluating plate boundary models. Here we integrate surface geology and geophysics with mantle tomography models to generate a digital set of tectonic blocks and plates as well as topologically closed plate boundaries with time-dependent rotational histories for the circum-Arctic. We find that subducted slabs inferred from seismic velocity anomalies from global P and S wave tomography models can be linked to various episodes of Arctic subduction since the Jurassic, in particular to the destruction of the South Anuyi Ocean. We present a refined model for the opening of the Amerasia Basin incorporating seafloor spreading between at least 142.5 and 120 Ma, a “windshield” rotation for the Canada Basin, and opening orthogonal to the Lomonosov Ridge for the northern Makarov and Podvodnikov basins. We also present a refined pre-accretionary model for the Wrangellia Superterrane, imposing a subduction polarity reversal in the early Jurassic before accretion to North America at 140 Ma. Our model accounts for the late Palaeozoic to early Mesozoic opening and closure of the Cache Creek Ocean, reconstructed between the Wrangellia Superterrane and Yukon–Tanana Terrane. We suggest that a triple junction may also explain the Mid-Palaeozoic opening of the Slide Mountain, Oimyakon and South Anuyi oceans. Our digital tectonic model forms the basis for the development of future plate deformation and geodynamic models and provides a framework for analysing the formation and evolution of regional sedimentary basins and mountain belts.

Downloads
Download the paper – pdf
A directory containing all supplementary data can be found here. Files for download include a topological network of plate polygons with dynamic geometries, rotation file, present-day coastlines and static polygons for reconstruction.
File formats provided are compatible with and are ready for use in GPlates and ArcGIS.
The refined plate model as presented in this paper was based on earlier global plate models released by the EarthByte Group including Seton et al. (2012).