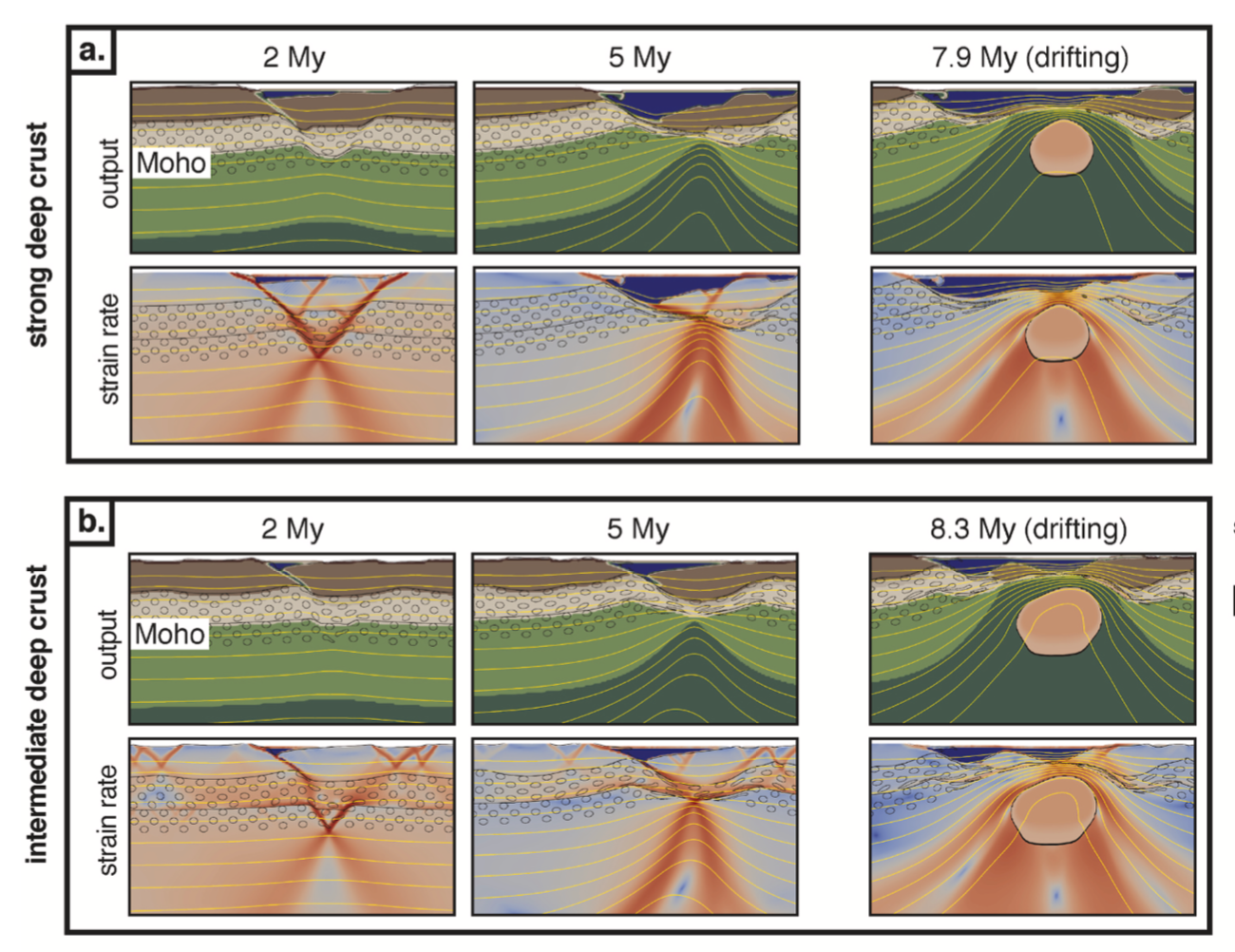 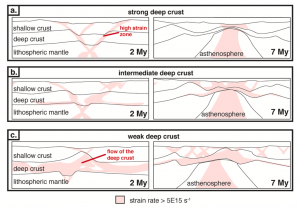 How continental lithosphere responds to extension is a function of the dynamic interaction between layers of differing rheological properties, including the shallow crust, deep crust, lithospheric mantle, and asthenosphere. We investigate the first-order controls on the modes of extension and timing of transition from continental rifting to development of continental margins via a suite of 2D numerical experiments (Underworld-1 code) in which divergence velocity, viscosity of the deep crust, and density of rift-basin fill are systematically varied. Results demonstrate that divergence velocity controls the tempo of extension and the timing of the transition from rifting to drifting: fast divergence (2 cm/yr) produces a single-phase rifting event; slower divergence (1 cm/yr) results in a two-phase rifting history that includes prolonged uniform thinning (Phase 1) followed by rapid rifting (Phase 2) as soon as structures connect across the lithosphere.

In the fast divergence experiments, the duration of rifting (10–12 My) depends on the deep crust viscosity and, therefore, the degree of intra-lithospheric coupling: a weaker deep crust delays the transition from rifting to drifting. There is no significant difference in timing between experiments with and without basins, except when the basin density is sufficiently high to drive a gravitational instability that generates a fast-subsidence (sagging) basin and a rapid transition to drifting.

Experiments under slow divergence display two phases of rifting and a significant delay of the rift-to-drift transition. During Phase 1 (20–30 My duration), strain-rate is uniformly distributed in the lithospheric mantle, and the Moho remains flat. As the lithosphere reaches ~50% of its original thickness, faults and shear zones become connected through the entire lithosphere, leading to Phase 2 of rapid rifting that evolves swiftly to complete lithospheric rupture. The duration of Phase 2 (8–15 My), from the formation of lithosphere-scale faults and shear zones to the eventual lithosphere rupture, is similar to that under fast divergence experiments. Results also reveal that this time span does not correlate with deep crust viscosity in a linear manner. Whereas a strong deep crust and a weak deep crust develop positive feedback mechanisms that result in rapid rifting, an inter- mediate-viscosity deep crust lingers in stretching/thinning mode, and the rift-to-drift transition is not reached until after the end of experiments. This behavior reflects the competition between localizing processes that dominate deformation within strongly coupled lithosphere and relatively diffuse deformation that characterizes weakly coupled lithosphere; this competition results in a negative feedback that delays the rift-to-drift transition. The addition of basin deposition in the slow-divergence experiments significantly hastens the localization of rifting that defines the start of Phase 2.