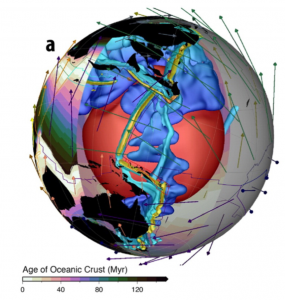 The breakup of Pangea in the Jurassic saw the opening of major ocean basins at the expense of older Tethyan and Pacific oceanic plates. Although the Tethyan seafloor spreading history has been lost to subduction, proxy indicators from multiple generations of Tethyan ribbon terranes, as well as the active margin geological histories of volcanism and ophiolite obduction events can be used to reconstruct these ancient oceanic plates. The plate reconstructions presented in this study reconcile observations from ocean basins and the onshore geological record to provide a regional synthesis, embedded in a global plate motion model, of the India-Eurasia convergence history, the accretionary growth of Southeast Asia and the Tethyan-Pacific tectonic link through the New Guinea margin.

The global plate motion model presented in this study captures the time-dependent evolution of plates and their tectonic boundaries since 160 Ma, which are assimilated as surface boundary conditions for numerical experiments of mantle convection. We evaluate subducted slab locations and geometries predicted by forward mantle flow models against P- and S-wave seismic tomography models. This approach harnesses modern plate reconstruction techniques, mantle convection models with imposed one-sided subduction, and constraints from the surface geology to address a number of unresolved Tethyan geodynamic controversies. Our synthesis reveals that north-dipping subduction beneath Eurasia in the latest Jurassic consumed the Meso-Tethys, and suggests that northward slab pull opened the younger Neo-Tethyan ocean basin from ~ 155 Ma. We model the rifting of ‘Argoland’, representing the East Java and West Sulawesi continental fragments, as a northward transfer of continental terranes in the latest Jurassic from the northwest Australian shelf – likely colliding first with parts of the Woyla intra-oceanic arc in the mid-Cretaceous, and accreting to the Borneo (Sundaland) core by ~ 80 Ma. The Neo-Tethyan ridge was likely consumed along an intra-oceanic subduction zone south of Eurasia from ~ 105 Ma, leading to a major change in the motion of the Indian Plate by ~ 100 Ma, as observed in the Wharton Basin fracture zone bends.

We investigate the geodynamic consequences of long-lived intra-oceanic subduction within the Neo-Tethys, requiring a two-stage India-Eurasia collision involving first contact between Greater India and the Kohistan-Ladakh Arc sometime between ~ 60 and 50 Ma, followed by continent-continent collision from ~ 47 Ma. Our models suggest that the Sunda slab kink beneath northwest Sumatra in the mantle transition zone results from the rotation and extrusion of Indochina from ~ 30 Ma. Our results are also the first to reproduce the enigmatic Proto South China Sea slab beneath northern Borneo, as well as the Tethyan/Woyla slab that is predicted at mid-mantle depths south of Sumatra. Further east, our revised reconstructions of the New Guinea margin, notably the evolution of the Sepik composite terrane and the Maramuni subduction zone, produce a better match with seismic tomography than previous reconstructions, and account for a slab at ~ 30°S beneath Lake Eyre that has been overridden by the northward advancing Australian continent. Our plate reconstructions provide a framework to study changing patterns of oceanic circulation, long-term sea level driven by changes in ocean basin volume, as well as major biogeographic dispersal pathways that have resulted from Gondwana fragmentation and accretion of Tethyan terranes to south- and southeast-Eurasia.