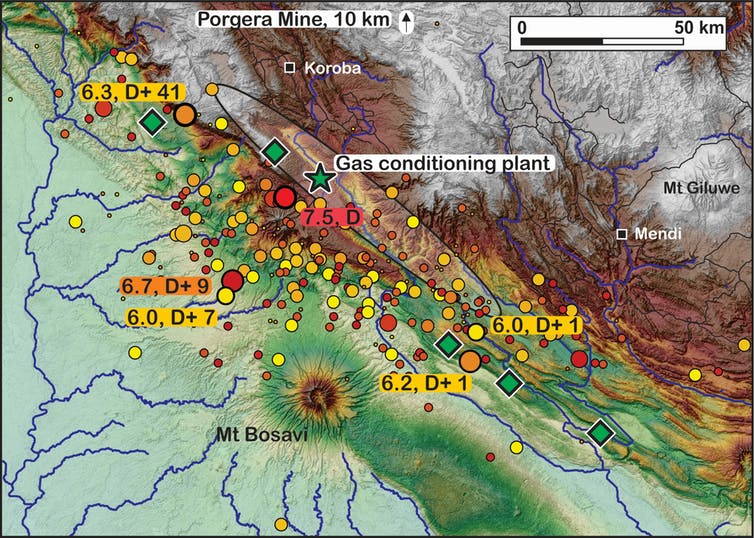 Aid organisations such as CARE Australia and UNICEF are still seeking donations. The Australian government has sent medical staff and other support to help.

Some have criticised the PNG government’s efforts as “too slow”.

But the earthquake highlights the challenge for emerging economies like PNG in deploying relief efforts into remote areas to deal with natural disasters.

And the same geological features that make PNG a rich source of mineral deposits are also part of its earthquake problem.

Some substantial crumpling of the continental crust still occurs across the southern foothills. The folding and thrusting has generated geologically young folds, within which a large part of PNG’s gas and oil wealth has accumulated.

The intense tectonic activity has also led to the enrichment of mineral resources, including mines sourcing gold, copper, silver, nickel, cobalt and a suite of other ore types.

Distribution of the aftershocks magnitude 4+ since the main quake (as of April 9, 2018). The size and colour (small to large, yellow to red) indicate aftershock magnitude and D+ the number of days after main shock. The white shaded ellipse represents the area of greatest slip during the main shock. Green diamonds represent the main gas fields. USGS/Gilles Brocard, Author providedIt is this tectonic activity that determines the delicate interplay of economic benefits from raw materials, and the often-devastating and usually-unpredictable effects of natural disasters on society.

Although the February earthquake occurred at the very heart of one of the largest and newest gas fields in the country, the industrial installations, at the highest international standards, have not suffered major damage from the tremors.

But the ongoing disaster triggered a temporary halt in gas extraction, as the facilities require inspections and repairs. Unfortunately, and unusually, the earthquakes have struck in some of the most remote parts of the country.

You can read the full article here at this link.