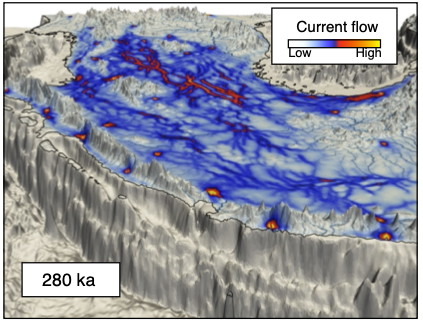 Sundaland, the inundated shelf separating Java, Sumatra and Borneo from the Malay Peninsula, is of exceptional interest to biogeographers for its species richness and its position at the junction between the Australasian and Indomalay biogeographic provinces. Owing to its low elevation and relief, its physiography is contingent on relative sea-level change, which drove Quaternary species burst in response to flooding episodes. New findings show that the region was predominantly terrestrial during the Late Pleistocene requiring a reassessment of the drivers of its recent biodiversity history. Here we show that physiographic changes have modified the regional connectivity network and remodelled the pathways of species dispersal. From combined landscape evolution and connectivity models, we found four phases of drainage reorganisation and river captures. These changes have fragmented the environment into multiple habitats connected by migratory corridors that cover 8% of the exposed shelf and stretch across the biogeographic provinces. Our results support the theory that rapidly evolving physiography could foster Quaternary biodiversification across Southeast Asia.