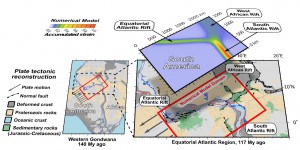 Congratulations to EarthByte’s Sascha Brune and Christian Heine (now at Shell in The Hague) who made it to the Sydney Uni front page with a media piece on “How the world missed out on a Saharan Atlantic ocean”, attracted international media attention and were chosen as a “Research Focus” in the current volume of Geology for their paper: Oblique rifting of the Equatorial Atlantic: Why there is no Saharan Atlantic Ocean. Well done!

Their paper addresses the role of rift obliquity during the opening of the Equatorial Atlantic and the subsequent acceleration of South America.

Rifting between large continental plates results in either continental breakup and the formation of conjugate passive margins, or rift abandonment and a set of aborted rift basins. In an attempt to evaluate and quantify the contribution of the rift geometry, we analyze the Early Cretaceous extension between Africa and South America that was preceded by ~20–30 m.y. of extensive intracontinental rifting prior to the final separation between the two plates. While the South Atlantic and Equatorial Atlantic conjugate passive margins continued into seafloor-spreading mode, forming the South Atlantic Ocean basin, Cretaceous African intraplate rifts eventually failed soon after South America broke away from Africa. We show that rift obliquity can act as selector between successful ocean basin formation and failed rifts, explaining the success of the highly oblique Equatorial Atlantic rift and ultimately inhibiting the formation of a Saharan Atlantic Ocean. We suggest that thinning of the last continental connection between Africa and South America produced a severe strength- velocity feedback responsible for the observed increase in South America plate velocity.