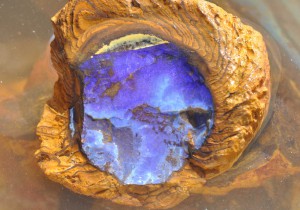 Opal is Australia’s national gemstone, however most significant opal discoveries were made in the early 1900’s – more than 100 years ago – until recently. Currently there is no formal exploration model for opal, meaning there are no widely accepted concepts or methodologies available to suggest where new opal fields may be found. As a consequence opal mining in Australia is a cottage industry with the majority of opal exploration focused around old opal fields.

The EarthByte Group has developed a new opal exploration methodology for the Great Artesian Basin. The work is based on the concept of applying “big data mining” approaches to data sets relevant for identifying regions that are prospective for opal. The group combined a multitude of geological and geophysical data sets that were jointly analysed to establish associations between particular features in the data with known opal mining sites. A “training set” of known opal localities (1036 opal mines) was assembled, using those localities, which were featured in published reports and on maps. The data used include rock types, soil type, regolith type, topography, radiometric data and a stack of digital palaeogeographic maps. The different data layers were analysed via spatio-temporal data mining combining the GPlates PaleoGIS software (www.gplates.org) with the Orange data mining software (orange.biolab.si) to produce the first opal prospectivity map for the Great Artesian Basin.

One of the main results of the study is that the geological conditions favourable for opal were found to be related to a particular sequence of surface environments over geological time. These conditions involved alternating shallow seas and river systems followed by uplift and erosion. The approach reduces the entire area of the Great Artesian Basin to a mere 6% that is deemed to be prospective for opal exploration. The work is described in two companion papers in the Australian Journal of Earth Sciences and Computers and Geosciences.