A unique structure in the Earth’s lowermost mantle, the Perm Anomaly, was recently identified beneath Eurasia. It seismologically resembles the large low-shear velocity provinces (LLSVPs) under Africa and the Pacific, but is much smaller. This challenges the current understanding of the evolution of the plate–mantle system in which plumes rise from the edges of the two LLSVPs, spatially fixed in time. New models of mantle flow over the last 230 million years reproduce the present-day structure of the lower mantle, and show a Perm-like anomaly. The anomaly formed in isolation within a closed subduction network ∼22,000 km in circumference prior to 150 million years ago before migrating ∼1,500 km westward at an average rate of 1 cm year−1, indicating a greater mobility of deep mantle structures than previously recognized. We hypothesize that the mobile Perm Anomaly could be linked to the Emeishan volcanics, in contrast to the previously proposed Siberian Traps. 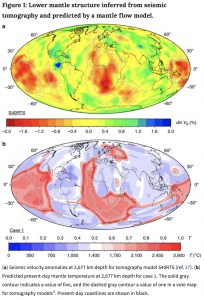