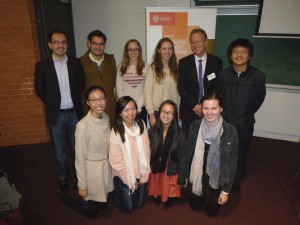 Theme: The magic and utility of the invisible world

Geo-theme: Windows into the deep Earth

In semester 1 2013 the EarthByte Group hosted a team of students from the Talented Student Program (TSP), targeted at the top performing first year students in the Faculty of Science at the University of Sydney. The students investigated windows into the deep Earth, that is, they unravelled the effect of ridge subduction events on mantle structure. They were exposed to plate tectonic models, seismic tomography and using the rules of geodynamics to tie surface tectonics to mantle structure. Slab windows provide an opportunity for the hot asthenosphere to come into direct contact with the edge of a continent. These windows leave distinctive traces in the present-day geological landscape, such as adakitic volcanism. The TSP students used the GPlates software (www.gplates.org) to combine plate models with deep mantle images to investigate the formation of past and present-day slab windows at subduction zones and assessed the suitability of using seismic tomography models to predict the presence of slab windows through time, especially where plate models alone are too uncertain to reconstruct them. Slab windows were identified by locating “gaps” in the positive seismic velocity anomalies, which indicate magma upwelling in subducted oceanic lithosphere, in a plate tectonic context. They investigated alternative mantle tomography models and alternative slab sinking rate scenarios to derive depth ranges and ages of potential slab windows in the Americas, northeast Asia, the Mediterranean and Sundaland. The project was supervised by Prof. Dietmar Muller and PhD students Sabin Zahirovic and Kara Matthews. 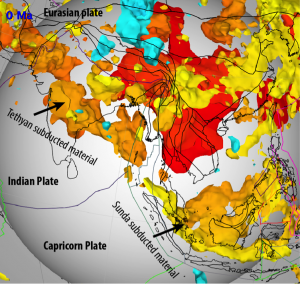 (left) 3D mantle structure of the Tethyan-Sunda subduction zones, showing subducted slab material in a seismic tomography model. Slabs are represented by a +0.3% seismic velocity anomaly iso-surface, coloured by depth where yellow is shallow (upper mantle), orange is mid-mantle and red is lowermost mantle. The ranges of depth indicate a long subduction history, and the spatial distribution indicates that the subduction zones have migrated through time.