The vigorous current systems in the Southern Ocean play a key role in regulating the Earth’s oceans and climate, with the record of long-term environmental change mostly contained in deep-sea sediments. However, the well-established occurrence of widespread regional disconformities in the abyssal plains of the Southern Ocean attests to extensive erosion of deep-sea sediments during the Quaternary. We show that a wide belt of rapid sedimentation rates (> 5.5 cm/kyr) along the Southeast Indian Ridge (SEIR) is a global anomaly and occurs in a region of low surface productivity bounded by two major disconformity fields associated with the Kerguelen Plateau to the east and the Macquarie Ridge to the west. Our high-resolution numerical ocean circulation model shows that the disconformity fields occur in regions of intense bottom current activity where current speeds reach 0.2 m/s and are favorable for generating intense nepheloid layers. These layers are transported towards and along the SEIR to regions where bottom current velocities drop to < 0.03 m/s and fine particles settle out of suspension consistent with focusing factors significantly greater than 1. We suggest that the anomalous accumulation of sediment along an 8,000 km-long segment of the SEIR represents a giant succession of contourite drifts that is a major extension of the much smaller contourite east of Kerguelen and has occurred since 3–5 Ma based on the age of the oldest crust underlying the deposit. These inferred contourite drifts provide exceptionally valuable drilling targets for high-resolution climatic investigations of the Southern Ocean. 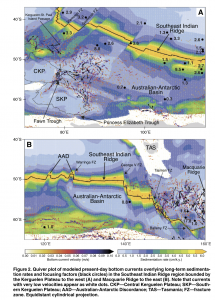