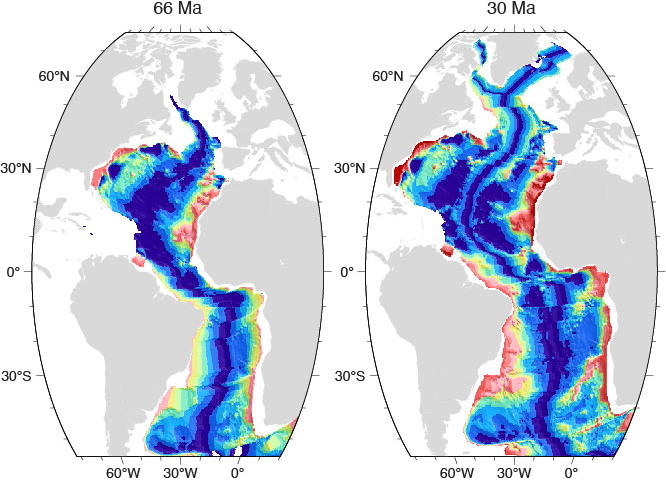 The Atlantic is the only ocean basin almost entirely surrounded by passive margins, and a major global long-term sink of carbonate carbon that has evaded subduction. Quantifying the history of carbonate accumulation in the Atlantic has been limited by the absence of well-defined regional carbonate compensation depth (CCD) models. We determine the CCD for the northern North Atlantic, central North Atlantic, and South Atlantic, and use these reconstructions to compute the carbonate carbon mass and carbonate carbon flux in a tectonic framework at 0.5 m.y. intervals since 66 Ma. We find that the total carbonate carbon
mass of the Atlantic has grown 2.5-fold from ∼1,500 Mt at 66 Ma to ∼3,800 Mt at present day. The overall Cenozoic increase in carbonate carbon flux toward the present day is punctuated by “carbonate crash” phases in the mid-Eocene at ∼44–38 Ma and in the mid-late Miocene at ∼19–8 Ma. During these times the flux decreases from ∼45 to ∼25 Mt C/yr, likely caused by carbonate dissolution and reductions in productivity. Reduced carbonate carbon flux in the mid-Eocene also coincides with reduced calcification rates of small coccolithophores previously observed offshore Africa. After ∼8 Ma the carbonate carbon flux rises to a Cenozoic maximum of ∼75 Mt C/yr at ∼3 Ma, possibly driven by enhanced flux of nutrients into the ocean. Our CCD curves and the resulting carbonate accumulation history are useful for calibrating ocean chemistry models, and constraining global terrestrial weathering rates, climate perturbations, and carbon cycle models.