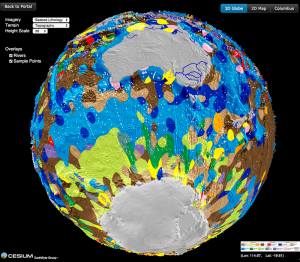 A collaboration between National ICT Australia (NICTA) and the University of Sydney School of Geosciences has created the first digital map of seafloor sediments.

In collaboration with the University of Sydney, NICTA has developed a computer algorithm to turn 15,000 seafloor sediment observations into a continuous digital map. The first “census of seafloor sediments” reported in the journal Geology is rendered as a spectacular, interactive spinning virtual globe that allows anyone to fly through the colourful patchwork of seafloor geology draped over a terrain map.

Ocean sediments cover 70 per cent of our planet’s surface, forming the substrate for the largest ecosystem on Earth and its largest carbon reservoir – but the most recent map of seafloor geology was drawn by hand over 40 years ago, at the dawn of modern ocean exploration.

Dr. Dutkiewicz, lead researcher at the University of Sydney explains, “The difference between the new and old map is a little like comparing a barren tundra landscape with an exotic tropical paradise full of diversity. The ocean floor used to be portrayed as a monotonous seascape whereas the new map echoes the colourful patchworks of dreamtime art.

“The deep ocean floor is a graveyard with much of it made up of microscopic sea creatures called phytoplankton, whose dead remains rain down through the water column like ‘marine snow’. The composition of their shells is used to decipher how our oceans have responded to past climate change.”

Microscopic marine organisms play a critical role in the global carbon cycle, but many of the mechanisms that are thought to control the geologic accumulation of the phytoplankton  carbonate and silica shells as are very difficult to quantify. The new digital map of seafloor sediments provides a missing link for constraining global relationships between the seafloor and the sea-surface.

Dr. O’Callaghan adds, “Big data technologies, paired with old and new data, now allow us to better predict the impact changing climate and ecosystems may have on the life cycle of phytoplankton, by jointly analysing a multitude of sea surface and seafloor observations.

“Now that Australia has a brand-new marine research vessel, the Investigator, the new seafloor data set opens the door to future voyages aimed at better understanding the workings and history of the marine carbon cycle.”

The interactive seafloor globe can be viewed on any browser on smartphones, tablets or computers.

This research is supported by the Science and Industry Endowment Fund.