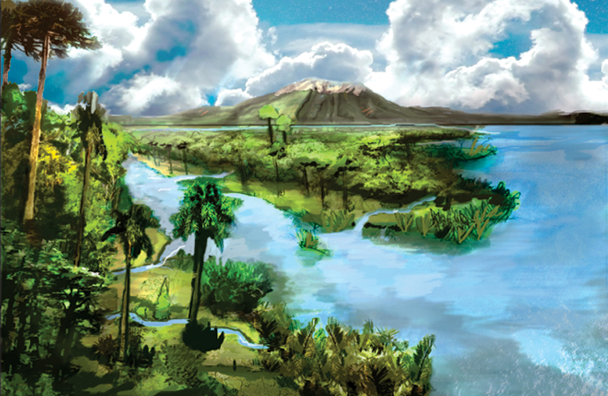 A new study has revealed how the plate tectonic carbon cycle maintains a “Goldilocks climate” on Earth that is neither too hot nor too cold.

It is now established that CO2 emissions from burning fossil fuels are driving atmospheric CO2 above 400 parts per million (ppm), causing global warming. But what caused climate change millions of years ago, before humans arrived on the scene?

An international team led by Professor Dietmar Müller at the University of Sydney’s School of Geosciences has modelled Earth’s carbon cycle over the last 250 million years to find the answer.

Their results, published in Nature, suggest that speeding tectonic plates cause greenhouse climates, while slow-moving plates can tip the Earth into an icehouse climate.

From hothouse to icehouse

A hothouse climate occurs when the planet has no ice sheets. In the Cretaceous Period (~145-66 million years ago), atmospheric CO2 rose above 1000 ppm, causing mean annual temperatures to be up to 10°C hotter than today. The sweltering heat led to a thriving dinosaur population in lush forests of ferns, cycads, and conifers and triggered the evolution of flowering plants and bees, key parts of our terrestrial ecosystems.

The team used a computer-generated model to show that the Cretaceous greenhouse climate was caused by tectonic plates moving extremely fast. Through a series of environmental interactions, this led to a doubling of CO2 emissions along mid-ocean ridges.

Slowing tectonic plates have been thought to cool the planet simply by reducing the volcanic emissions of CO2 along less active plate boundaries.  However, Müller’s team showed that this process was offset in the Cenozoic by increasing volcanic CO2 emissions from deep-sea carbonate sediments that are recycled back into the deep Earth along subduction zones, where plates dive into the Earth’s hot interior.

This process is so effective in emitting CO2 that it more than offsets the reduced CO2 emissions due to the slowing down of plate tectonics. Therefore slowing plates must have had another way to extract CO2 from the atmosphere and store it away. The answer lies in the mountain chains that were responsible for slowing down the plates in the first place.

The role of mountains and deep-sea sediments

When the supercontinent Pangea started breaking apart 200 million years ago, the continents didn’t have much mountainous topography. As the Pangea progressively disintegrated, new ocean gateways formed, and eventually the widely dispersed continents started running into each other, creating massive mountains from the Himalayas to the Alps, starting around 50 million years ago and slowing plate tectonics down.

The new model implies that slowing plates cooled the climate with the aid of eroding mountains, with erosion products, including carbon, ultimately being stored away in ocean sediments. As soon as mountains form, they start being eroded. Rainwater containing CO2 reacts with a range of mountain rocks, breaking them down and rivers carry dissolved minerals into the sea.

The Cretaceous hothouse climate preceding the Cenozoic cooling had an unexpected benefit: it triggered the evolution and diversification of tiny sea creatures, plankton and algae, that live in the sunlit waters of the surface ocean and build their shells or skeletons from dissolved carbonate, provided by erosion on the continents. When they die, they fall to the seafloor, storing away carbon in deep-sea sediment layers that became thicker and thicker after the Cretaceous.

The increasing volume of carbonate deep-sea sediments partly reflects a falling sea level, gradually eliminating many shallow seas that covered the continents during the Cretaceous, and shifting carbonate production out into the ocean. However, it appears that the increasing volume of deep-sea carbonate sediments also reflects the increasing supply of erosion products from the continents. Massive amounts of CO2, therefore, became stored away, and the planet cooled, even though a portion of this new oceanic carbonate sediment reservoir was subducted and emerged again as CO2 through arc volcanoes.

The balance between volcanism and erosion, and sedimentation, emitting or storing away carbon, ultimate ensures that the Earth remains habitable. Can we make use of any of these geological processes for carbon capture over the next decades?

Published laboratory experiments have shown that the weathering of dark igneous rocks, containing the green mineral olivine in abundance, is efficient in removing CO2 from the atmosphere. This had led to the proposal of a negative emissions technology that enhances silicate weathering along coasts, accelerating the geological silicate weathering mechanism to become useful for carbon capture on human timescales.

One idea is that the volcanic mineral olivine would be spread across coastal areas to make green sand beaches. Waves help breaks down the rock, accelerating a reaction that removes CO2 from the atmosphere. This process could be harnessed to absorb up to a trillion tonnes of carbon dioxide from the atmosphere.

However, the current speed of human-induced warming is so rapid that geological processes alone, even if engineered as negative emissions technologies, cannot work fast enough to retain a ‘goldilocks’ climate. Therefore, we will also need to reduce emissions to avoid a hothouse climate that would potentially make many regions on Earth uninhabitable.