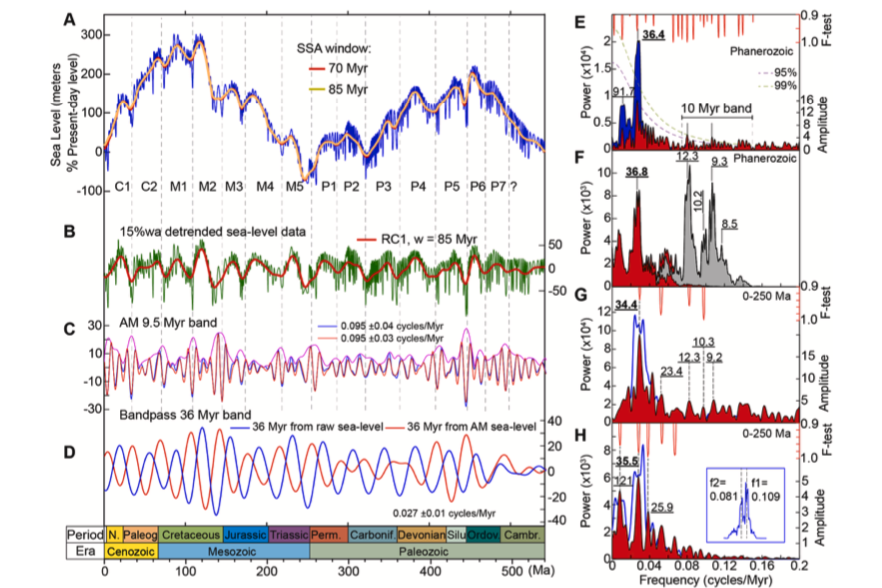 The driving mechanisms of Earth’s climate system at a multi-Myr timescale have received considerable attention since the 1980’s as they are deemed to control large-amplitude climatic variations that result in severe biogeochemical disruptions, major sea-level variations, and the evolution of Earth’s land- and seascapes through geological time. The commonly accepted mechanism for these changes derives from the evolution of Earth’s coupled plate-mantle system. Connection between Earth’s interior and external climate drivers, e.g., Milanko- vitch insolation forcing, has not been investigated at multi-Myr timescale, because tectonics and astronomical influences at these longer timescales have long been thought as independent pacemakers in the evolution of the Earth system.

Here we have analyzed time-series from multiple geological datasets and found common periodicities of 10 and 35 Myr. Additionally, we have highlighted the modulation in amplitude of the 10 Myr cycle band by the 35 Myr cyclicity in sedimentary sea-level data. We then demonstrate the same physical amplitude modulation relationship between these two cyclicities in astronomical (Milankovitch) variations, and establish correlation between Milankovitch and sea-level variations at these two frequency bands. The 10 and 35 Myr cycles are prominent in the geological records, suggesting either unresolved fundamental Milankovitch periodicities, or reflecting a sedimentary energy-transfer process from higher to lower Milankovitch frequencies, as argued here via amplitude modulation analysis in both astronomical and sea-level data.