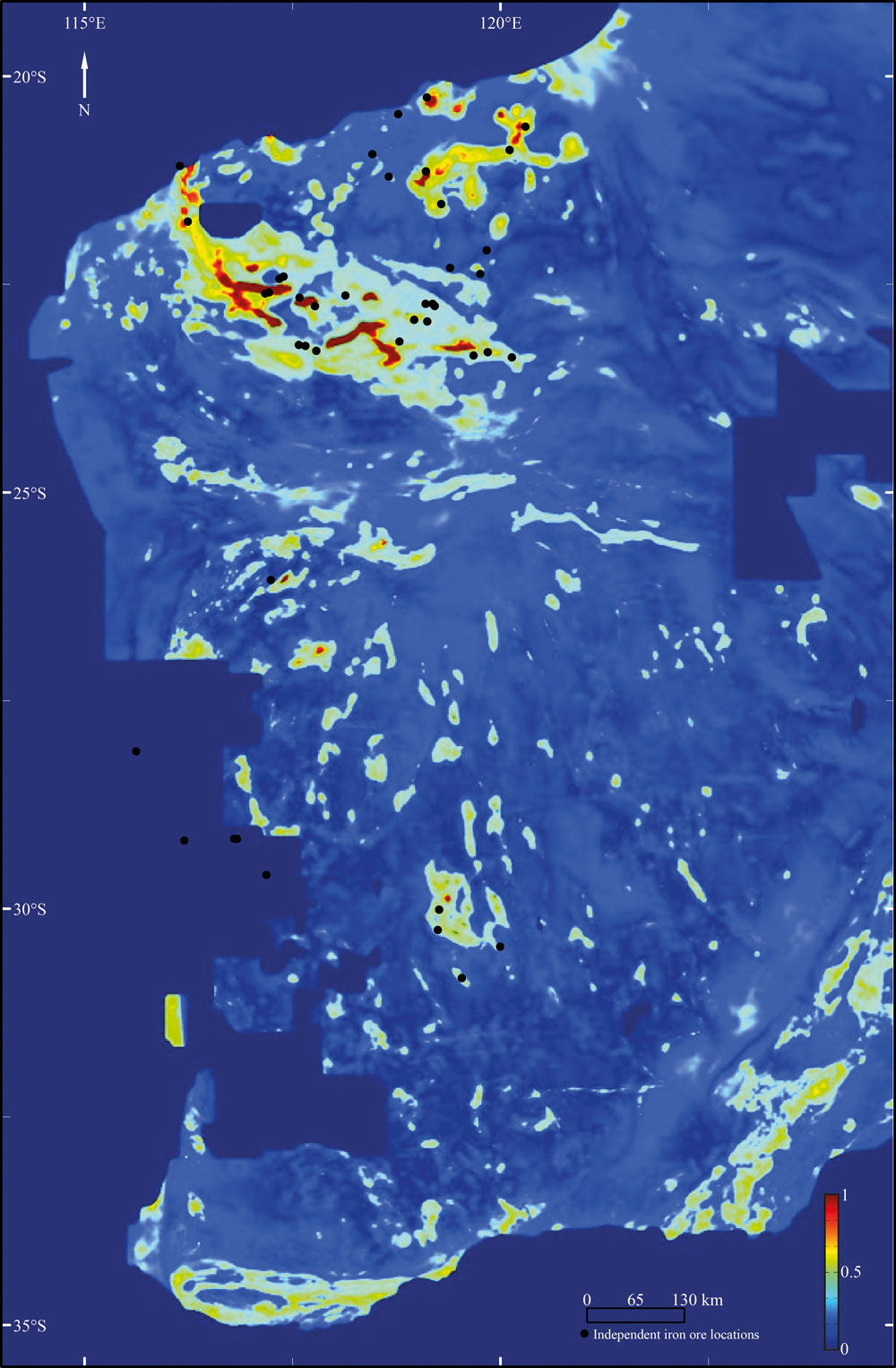 Abstract
There has recently been a rapid growth in the amount and quality of digital geological and geophysical data for the majority of the Australian continent. Coupled with an increase in computational power and the rising impor- tance of computational methods, there are new possibilities for a large scale, low expenditure digital exploration of mineral deposits. Here we use a multivariate analysis of geophysical datasets to develop a methodology that utilises machine learning algorithms to build and train two-class classifiers for provincial-scale, greenfield min- eral exploration. We use iron ore in Western Australia as a case study, and our selected classifier, a mixture of a Gaussian classifier with reject option, successfully identifies 88% of iron ore locations, and 92% of non-iron ore locations. Parameter optimisation allows the user to choose the suite of variables or parameters, such as classifier and degree of dimensionality reduction, that provide the best classification result. We use randomised hold-out to ensure the generalisation of our classifier, and test it against known ground-truth information to demonstrate its ability to detect iron ore and non-iron ore locations. Our classification strategy is based on the heterogeneous nature of the data, where a well-defined target “iron-ore” class is to be separated from a poorly defined non-target class. We apply a classifier with reject option to known data to create a discriminant function that best separates sampled data, while simultaneously “protecting” against new unseen data by “closing” the domain in feature space occupied by the target class. This shows a substantial 4% improvement in classification performance. Our predictive confidence maps successfully identify known areas of iron ore deposits through the Yilgarn Craton, an area that is not heavily sampled in training, as well as suggesting areas for further explo- ration throughout the Yilgarn Craton. These areas tend to be more concentrated in the north and west of the Yilgarn Craton, such as around the Twin Peaks mine (~27°S, 116°E) and a series of lineaments running east– west at ~25°S. Within the Pilbara Craton, potential areas for further expansion occur throughout the Marble Bar vicinity between the existing Spinifex Ridge and Abydos mines (21°S, 119–121°E), as well as small, isolated areas north of the Hamersley Group at ~21.5°S, ~118°E. We also test the usefulness of radiometric data for province-scale iron ore exploration, while our selected classifier makes no use of the radiometric data, we dem- onstrate that there is no performance penalty from including redundant data and features, suggesting that where possible all potentially pertinent data should be included within a data-driven analysis. This methodology lends itself to large scale, reconnaissance mineral explorations, and, through varying the datasets used and the com- modity being targeted, predictive confidence maps for a wide range of minerals can be produced.