Volcanic hotspot tracks featuring linear progressions in the age of volcanism are typical surface expressions of plate tectonic movement on top of narrow plumes of hot material within Earth’s mantle. Seismic imaging reveals that these plumes can be of deep origin—probably rooted on thermochemical structures in the lower mantle. Although palaeomagnetic and radiometric age data suggest that mantle flow can advect plume conduits laterally, the flow dynamics underlying the formation of the sharp bend occurring only in the Hawaiian–Emperor hotspot track in the Pacific Ocean remains enigmatic. Here we present palaeogeographically constrained numerical models of thermochemical convection and demonstrate that flow in the deep lower mantle under the north Pacific was anomalously vigorous between 100 million years ago and 50 million years ago as a consequence of long-lasting subduction systems, unlike those in the south Pacific. These models show a sharp bend in the Hawaiian–Emperor hotspot track arising from the interplay of plume tilt and the lateral advection of plume sources. The different trajectories of the Hawaiian and Louisville hotspot tracks arise from asymmetric deformation of thermochemical structures under the Pacific between 100 million years ago and 50 million years ago. This asymmetric deformation waned just before the Hawaiian–Emperor bend developed, owing to flow in the deepest lower mantle associated with slab descent in the north and south Pacific. 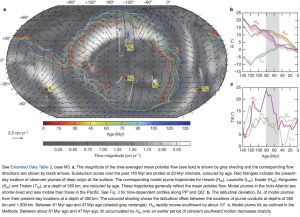 Subduction controls the distribution and fragmentation of Earth’s tectonic plates