The geodynamic evolution of the Western Tethys is characterized by multiple phases of rifting, seafloor spreading, subduction, and collisional events. Regional reconstructions are highly dependent on the kinematic history of the major plates bounding the Atlantic and Tethyan tectonic domains, as well as small micro-plates resulted from the fragmentation of northern Gondwanaland. The complexity of tectonic events in this area leads to major discrepancies between competing models about the timing, location, and polarity of subduction zones, for both the Cenozoic evolution and earlier phases. We focus on unravelling the Mesozoic evolution of the Western Tethys. We first reassessed kinematic models for the Early Jurassic–Late Cretaceous opening of the central, north central, and north Atlantic and used these as boundary conditions on the kinematic reconstructions of the Tethyan realm. We combined reconstructions of rifting and early seafloor spreading in northern Pangea that incorporate quantitative estimates of continental extension, and suggest a transtensional motion of Iberia relative to Europe in Early Cretaceous time to fit within the refined plate configuration of Central North Atlantic. We combined this regional framework with a recently published model for the motion of smaller blocks within the Western Tethys; from this model, we created synthetic isochrons for extinct oceanic basins and built evolving topological plate boundaries based on the new rigid plate model to derive a self-consistent and time-dependant model for the last 200 million years. We then examined the consistency of subduction history implied by the kinematic reconstructions, by comparing reconstructed plate boundary configurations to mantle velocity structure imaged by a range of seismic tomography models. Our results show that a satisfactory match can be made between Cenozoic subduction events in the Western Tethys region and observed shallow tomographic high-velocity material. However, the match is less clear for older subducted material. Correlations between surface reconstructions and deep Earth structure suggest that mid-deep mantle seismic features under present day Northeast-Central and Northwest Africa-Arabia may correspond with the Mesozoic subduction systems in the Vardar Ocean, Alpine Tethys, and Western Neotethys, respectively. These correlations support a model with intra-oceanic subduction of the Vardar Ocean from Middle Jurassic to Early Cretaceous, and mid-Early Cretaceous initiation of oceanic subduction in the Ligurian-Piemont Ocean. The results from the platetomography comparison suggest the existence of oceanic subduction in the Alpine Tethys Oceans in late early Cretaceous time. We investigated the uncertainties in the tectonic model in terms of absolute and relative plate motion and surface velocities and showed that choice of absolute reference frame can partially account for the lateral offset between the Vardar subduction zone and associated slab material in deep mantle; additional mismatches may be attributable to the limitations of our methodology, such as the assumption that slabs sink vertically. 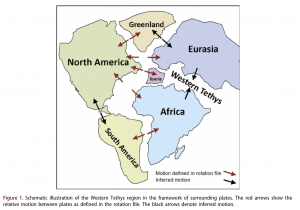