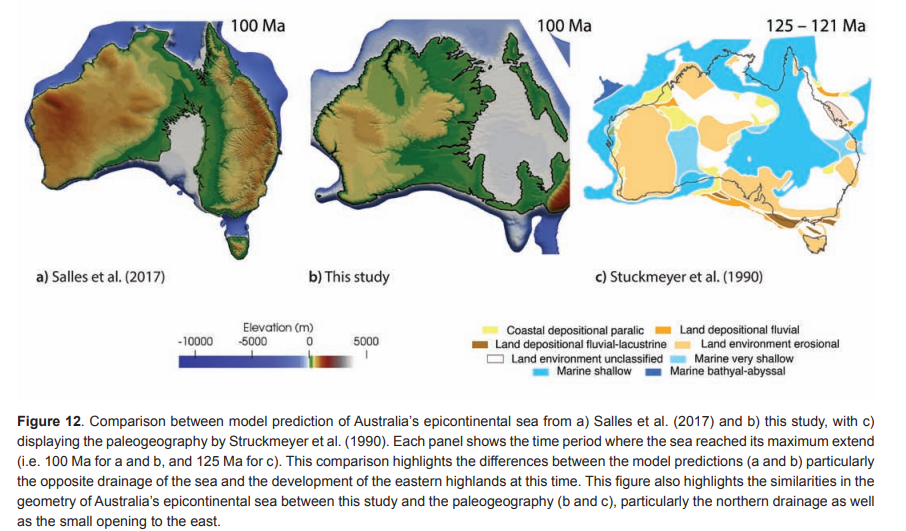 Abstract: Today the eastern highlands of Australia are significantly more elevated than western Australia, but the continent’s geodynamic evolution suggests that the opposite was the case during Cretaceous times, when the Eromanga Sea dominated the eastern Australian landscape. Previous geodynamic and surface processes models have been used to simulate the evolution of this seaway, but fell short in capturing its spatial and temporal characteristics, mainly because changes in tectonic topography were not sufficiently explored. Here we combine dynamic (mantle-driven) and tectonic topography across the Australian continent with global sea level change and surface processes since the late Triassic to understand the main driving factors of uplift, subsidence, erosion and coastline migration. A variety of initial and boundary conditions are tested and refined to place constraints on the evolution of Australian paleogeography. These include the paleotopography of the Australian continent during the Late Triassic at the starting time of our model, the magnitude and distribution of tectonic and dynamic topography following Gondwana break-up, the time dependence of precipitation and erodibility across the Australian continent and the combined effect of these parameters on erosion and coastline change through time. Iterative model refinement leads to a model with a variable erodibility grid considering major erodibility differences across the Tasman Line, and an initial topography that incorporates the influence of the African superswell on the elevation of western Australia throughout the mid-Mesozoic. Our models reproduce the northern drainage of the Eromanga Sea without a connection to the embryonic Southern Ocean, as suggested by geological observations, through the inclusion of a Cretaceous AustraliaAntarctic rift shoulder, whose initial elevation and its erodibility is explored in our models. We constrain the Australia-Antarctic rift shoulder elevation to a relatively small preferred value of 100 m ± 50 m. Our model reproduces the major features in published paleogeographic maps, which were not used as model inputs, with the exception of the initial Late Triassic model topography. Additionally, this work provides new insights into the elevation of western Australia during the early Mesozoic. Due to the proximity of western Australia to the African mantle superswell at this time, our models suggest that the region experienced a broad increase in elevation to ~500 m, paired with relatively low erosion rates, considering published denudation estimates. Our work provides a starting point for generating more detailed models of basin and margin evolution and stratigraphy through time and provides a basis for understanding the evolution of Australia’s surface environments.