The origin of Shatsky Rise, a large igneous plateau in the NW Pacific, has long been debated. It could have either formed by shallow mantle melting due to its confirmed creation along a mid-ocean ridge or with additional contribution of deeper mantle material that upwelled as so-called mantle plume beneath the spreading ridge (“plume-ridge interaction”). The identification of an intraplate hotspot track emanating from Shatsky Rise and related to the plateau could answer this question. Here we present major and trace element geochemical data from lava samples dredged from two different structures that arise from the youngest end of the Shatsky Rise plateau: Papanin Ridge and the Ojin Rise Seamount province. By combining our results with plate tectonic reconstructions, we conclude that Papanin Ridge formed, like the main Shatsky Rise, by continued plume-ridge interaction. In contrast, the Ojin Rise Seamounts formed as a true intraplate hotspot track by the drift of the Pacific Plate over the stationary Shatsky hotspot (plume tail). The recognition of an intraplate hotspot track that is directly linked to the Shatsky plateau volcanism both in terms of geochemistry and plate tectonic reconstructions also confirms the involvement of a mantle plume for the formation of Shatsky Rise. 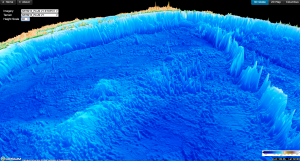