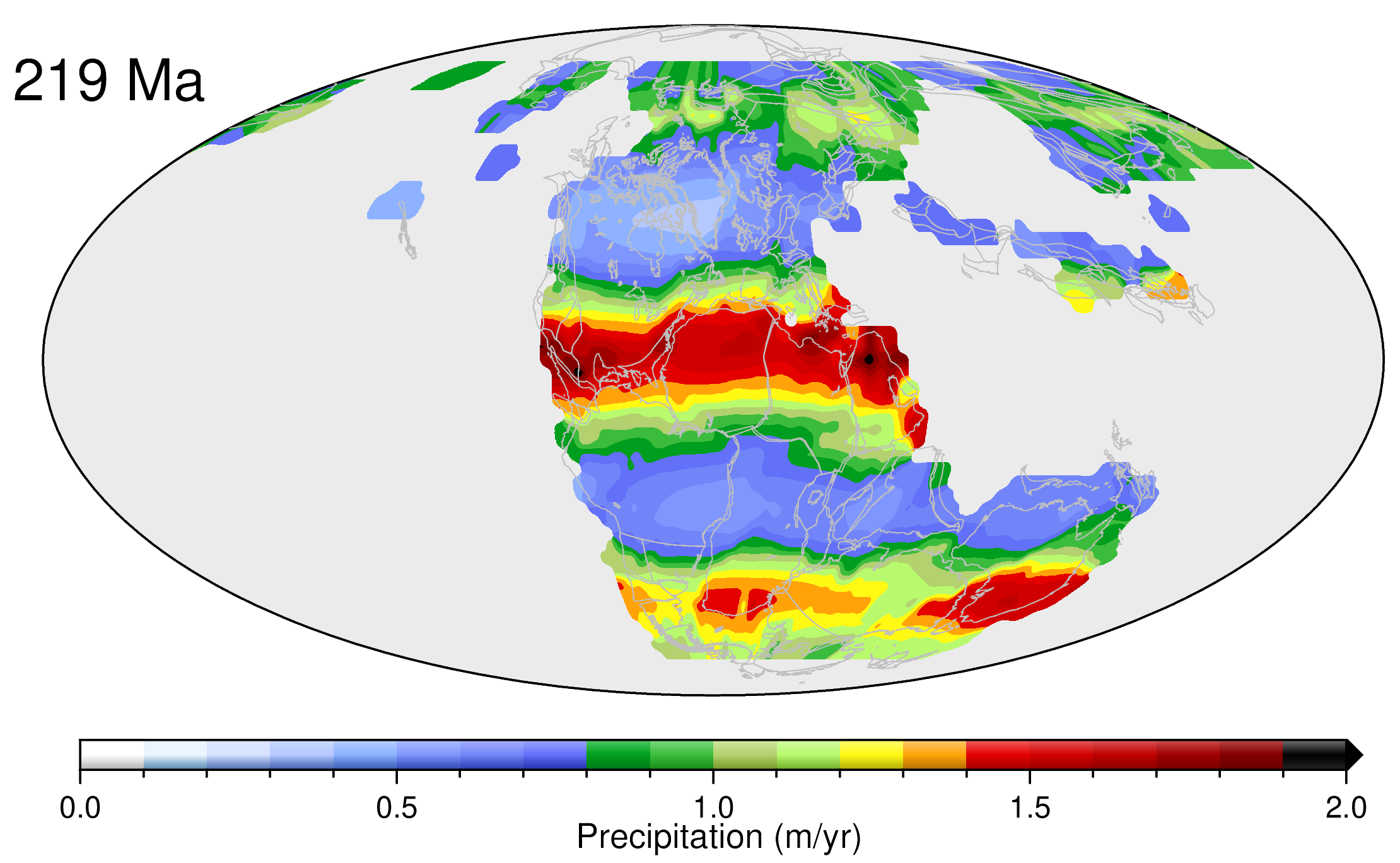 We have developed a novel data-driven approach to reconstruct precipitation patterns through geological time, since the supercontinent Pangea was in existence. Our approach involves linking climate-sensitive sedimentary deposits such as coal, evaporites and glacial deposits to a global plate model, reconstructed paleo-elevation maps and high-resolution General Circulation Models via Bayesian machine learning. We model the joint distribution of climate-sensitive sediments and annual precipitation through geological time, and use the dependency between sediments and modelled precipitation in the Miocene and Eocene to train the machine learning model. Our approach provides a set of 13 data-driven global paleo-precipitation maps between 14 and 249 Ma, capturing major changes in long-term annual rainfall patterns as a function of plate tectonics, paleo-elevation and climate change at a low computational cost.

Our predicted precipitation maps illustrate how the distribution of continents and oceans as well as latitude, reflecting paleo-temperature gradients, control precipitation. Moving back in time from the Late (14 Ma) to the Early Cenozoic (61 Ma), changing latitudinal positions of Africa results in northern Africa becoming wetter while central Africa south of the equator becomes progressive drier. In contrast, there is less of a change in broad precipitation patterns observed in the Americas, because their latitudinal positions have changed little during the Cenozoic Period.  India moves through the wet equatorial belt in the early-mid Cenozoic, resulting in intense precipitation throughout most of the sub-continent at 51 Ma, while at 61 Ma most of India is located south of this belt, leading to a progressive drying that intensifies in the Cretaceous. As Australia moves south back in geological time, gradually closing the southeast Indian Ocean, its southern half experiences a greening due to its movement into southern hemisphere mid-latitudes, marked by moderate rainfall reflecting eastward traveling depressions and fronts that yield rain throughout the year.

Throughout the Cretaceous Period, patterns of annual precipitation are predicted to change more significantly back in time as the South Atlantic closes, creating a large landmass by joining South America and Africa, as seen at 129 Ma. Going back in time, the elimination of western African coasts and the creation of a vast continental interior region at 129 Ma results in a marked change in precipitation, moderating the precipitation highs seen after continental breakup in the Late Cretaceous at 101 and 77 Ma along the coast of Western Africa between what is now Nigeria and Senegal. The large equatorial Tethys gateway that existed in the Early Cretaceous between Africa/South America and Eurasia results in an increase in precipitation along the northeastern coastline of Africa, seen at 129 Ma. Moving back in time from the Late into the Early Cretaceous, India experiences a greening again as it moves into the southern mid-latitude belt of moderate rainfall.

Moving into the Jurassic a large southern continent, Gondwana, forms, whose interior is relatively dry, but whose northern and southern portions straddle high to medium rainfall belts, as visible at 154 Ma.  The Early Jurassic (182 Ma) exhibits a reduction in northern Gondwana rainfall compared to the Late Jurassic (154 Ma), reflecting the elimination of central Atlantic coastlines by closing the central North Atlantic Ocean and forming the supercontinent Pangea, which persists throughout the Triassic (since 249 Ma). Pangea in the Triassic shows a relatively stable precipitation pattern with two prominent rainfall lows centered around 35 degrees north and south, with an equatorial high and moderate mid-latitude highs.  Southern hemisphere mid-latitude rainfall is most intense in the Late Triassic at 219 Ma, while the Early Triassic is somewhat drier in Gondwana’s (southern Pangea’s) interior and along the southern perimeter of Pangea.