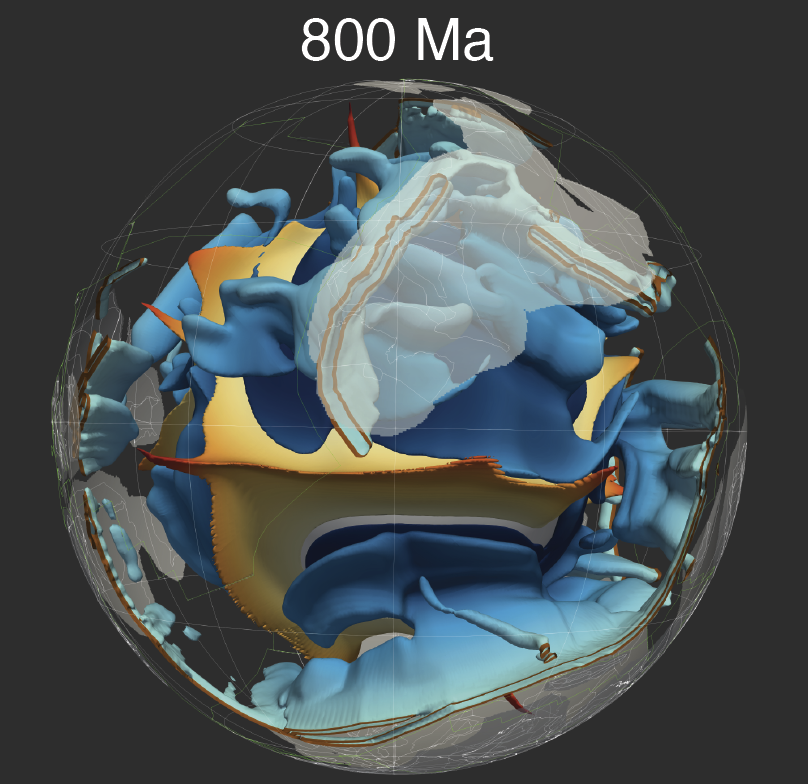 Understanding the long-term evolution of Earth’s plate-mantle system is reliant on absolute plate motion models in a mantle reference frame, but such models are both difficult to construct and controversial. We present a tectonic rules-based optimisation approach to construct a plate motion model in a mantle reference frame covering the last billion years and use it as a constraint for mantle flow models.  Our plate motion model results in net lithospheric rotation consistently below 0.25°/Myr, in agreement with mantle flow models, while trench motions are confined to a relatively narrow range of -2/+2 cm/yr since 320 Ma, during Pangea stability and dispersal. In contrast, the period from 600 Ma to 320 Ma, nicknamed here the “zippy tricentenary”, displays twice the trench motion scatter compared to more recent times, reflecting a predominance of short and highly mobile subduction zones. Our model supports an orthoversion evolution from Rodinia to Pangea with Pangea offset approximately 90° eastwards relative to Rodinia—this is the opposite sense of motion compared to a previous orthoversion hypothesis based on paleomagnetic data.  In our coupled plate-mantle model a broad network of basal mantle ridges forms between 1000 and 600 Ma, reflecting widely distributed subduction zones. Between 600 and 500 Ma a short-lived degree-2 basal mantle structure forms in response to a band of subduction zones confined to low latitudes, generating extensive antipodal lower mantle upwellings centred at the poles.  Subsequently the northern basal structure migrates southward and evolves into a Pacific-centred upwelling while the southern structure is dissected by subducting slabs, disintegrating into a network of ridges between 500 and 400 Ma. From 400 to 200 Ma, a stable Pacific-centred degree-1 convective planform emerges,. It lacks an antipodal counterpart due to the closure of the Iapetus and Rheic oceans between Laurussia and Gondwana as well as due to coeval subduction between Baltica and Laurentia and around Siberia, populating the mantle with slabs until 320 Ma when Pangea is assembled. A basal degree-2 structure forms subsequent to Pangea breakup, after the influence of previously subducted slabs in the African hemisphere on the lowermost mantle structure has faded away. This succession of mantle states is distinct from previously proposed mantle convection models. We show that the history of plume-related volcanism is consistent with deep plumes associated with evolving basal mantle structures. This Solid Earth Evolution Model for the last 1000 million years (SEEM1000) forms the foundation for a multitude of spatio-temporal data analysis approaches.