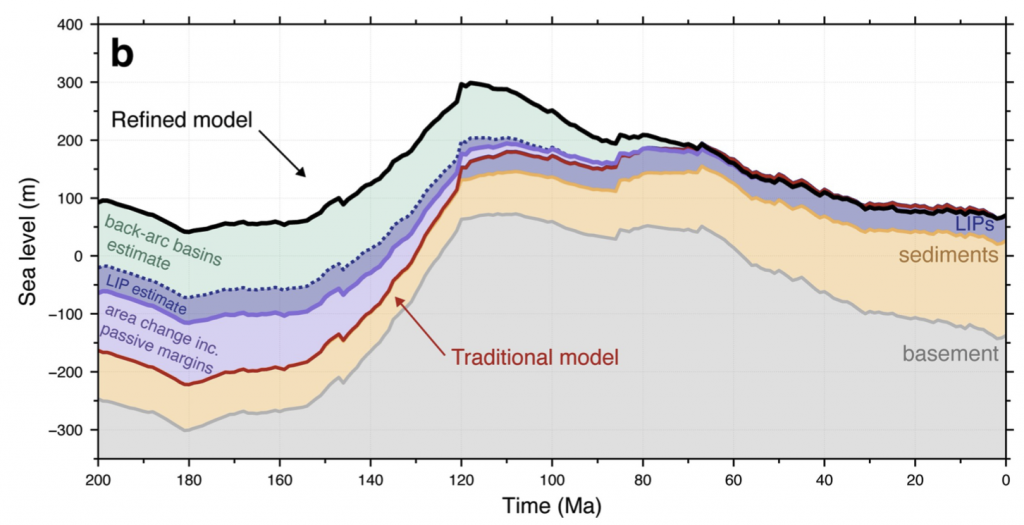 Long-term variations in eustatic sea level in an ice-free world, which existed through most of the Mesozoic and early Cenozoic eras, are partly driven by changes in the volume of ocean basins. Previous studies have determined ocean basin volume changes from plate tectonic reconstructions since the Mesozoic; however, these studies have not considered a number of important elements that contribute to ocean basin volume, such as regional differences in sedimentation, or uncertainties within the plate tectonic model itself, such as spreading asymmetries and the incomplete representation of back-arc basins in the Mesozoic. Additionally, studies on long-term changes in sea level related to the extension and rifting of passive margins have not been performed on a global-scale and likely significantly underestimated the influence of this process. In order to improve reconstructions of sea level on geologic time scales and assess the uncertainty in deriving the volume of ocean basins based on a global plate kinematic model, we investigate the influence of back-arc basins, spreading asymmetry, large igneous provinces (LIPs), sediment thickness, and passive margins on ocean basin volume since 200 Ma. We find that less-constrained plate tectonic elements, such as the presence of back-arc basins or spreading asymmetry, may contribute up to ~120 m or ~150 m to sea level respectively. Changes in the sea level related to sedimentation and LIPs are respectively ~75–165 m and ~45 m. Changes in sea level associated with passive margin formation are almost negligible at present day, though were much larger in the Cretaceous, and the assumed sedimentation style strongly influences the rate and magnitude of sea-level change. We in- corporate predictions for these components during times where ocean basins are predominantly synthetic reconstructions and find that sea level driven by fluctuating ocean basin volume has changed by ~200 m since the Jurassic, which is comparable to previous estimates. Our revised estimates will need to be combined with other processes driving long-term sea-level change, including mantle convection-driven dynamic topography and glacio-eustasy for constructing a complete eustatic sea-level curve. Understanding and quantifying the un- certainties in the volume of ocean basins has implications for modelling subduction flux, the oceanic carbon cycle, and heatflow, and is important for exploring Earth’s evolutionary cycles, especially during times in the geologic past where much of the ocean basin history has been lost.